I’m a recent vim convert. 100% in it now. There has been literally one thing, and only one thing, I’ve missed from other editors (namely Sublime Text) until today: Global, or project-wide, find and replace.

Allow me to illustrate: 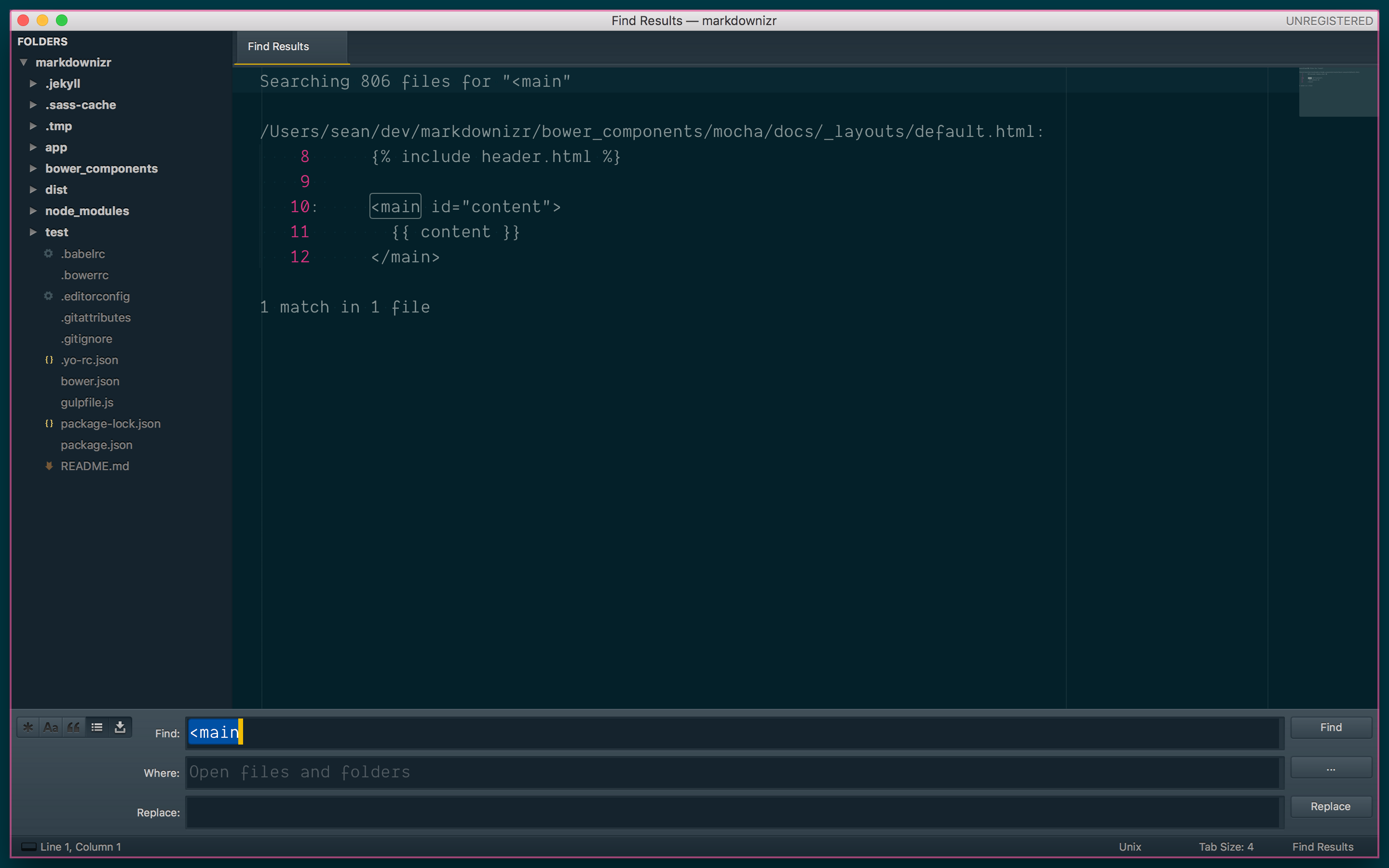 Use case: you have a massive project with tons partials/includes and so forth. You want to jump to a specific markup node to add a new feature/bug. So instead of muddling around in the file browser in the sidebar, you slam down Cmd+Shift+F, and tell the computer what you’re looking for. Boom, all occurrences are listed, and you can open one up and start working.

Later, you change a class and need to update 17,342 css files to replace the old class name with the new one. So: 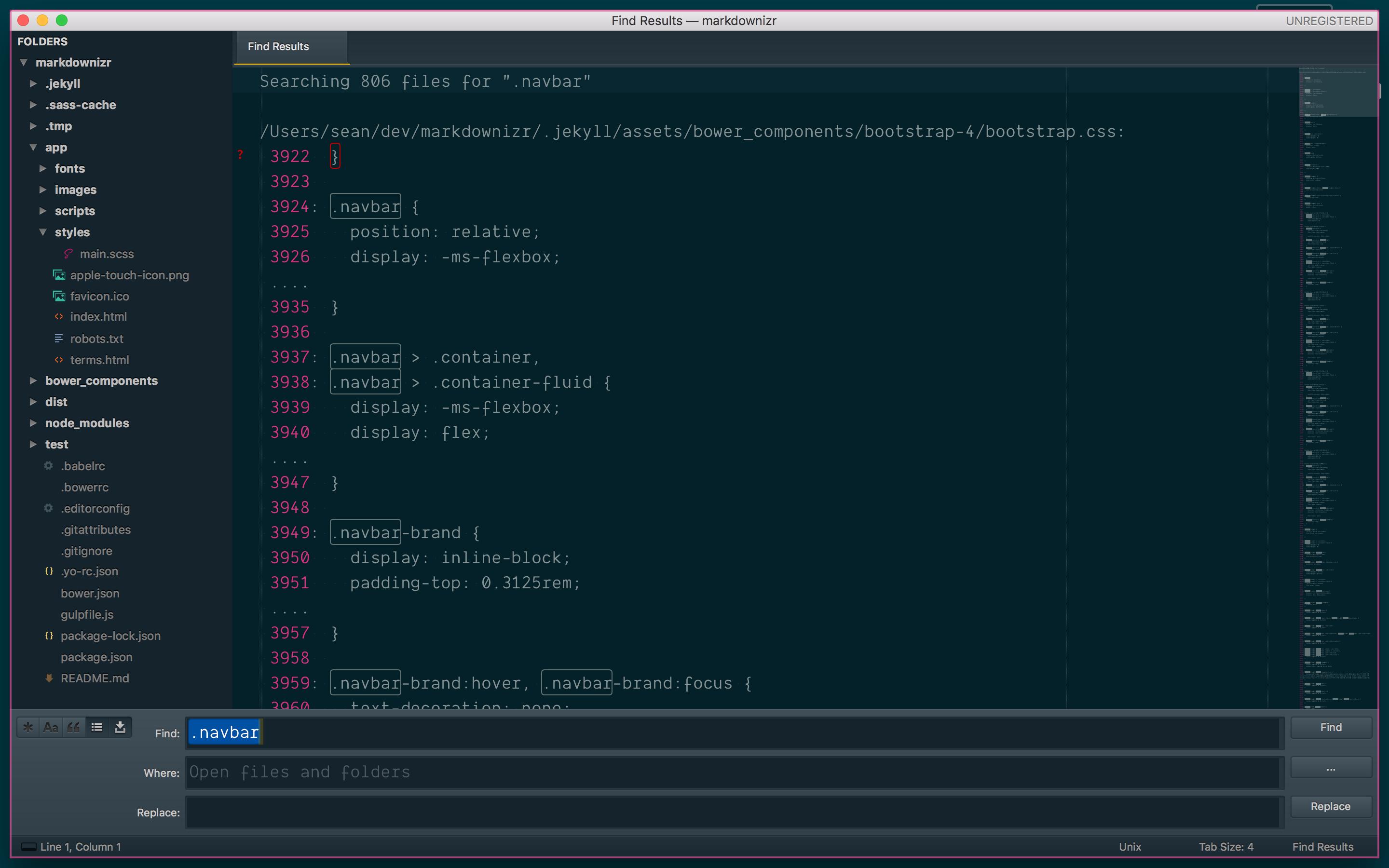 So vim must have this built in right?

Doing The Same Thing In A Stock Build Of Vim

Well, the short answer is yes, The long answer is it’s not ideal.

You can run :vimgrep [PATTERN] [PATH]. Now before you attempt this in a real project, be sure to set a wildignore such as:

This prevents vim from searching through node modules for nine hours. Also, be sure that you’ve started vim from your project directory, like cd myproject && vim or vim ~/myproject.

So, to replicate the default behavior of something like Sublime, we now do:

Do note the backslashes; this is vim and we must escape all the things. The **/* is a standard Unix pattern format that’s like saying “look at any/all directories and any/all contents”.

Now hit enter, and get up to make some coffee. Hopefully you’re a hipster and you have one of those manual burr grinders, and you grind your coffee on a per-cup basis; this is going to take awhile. 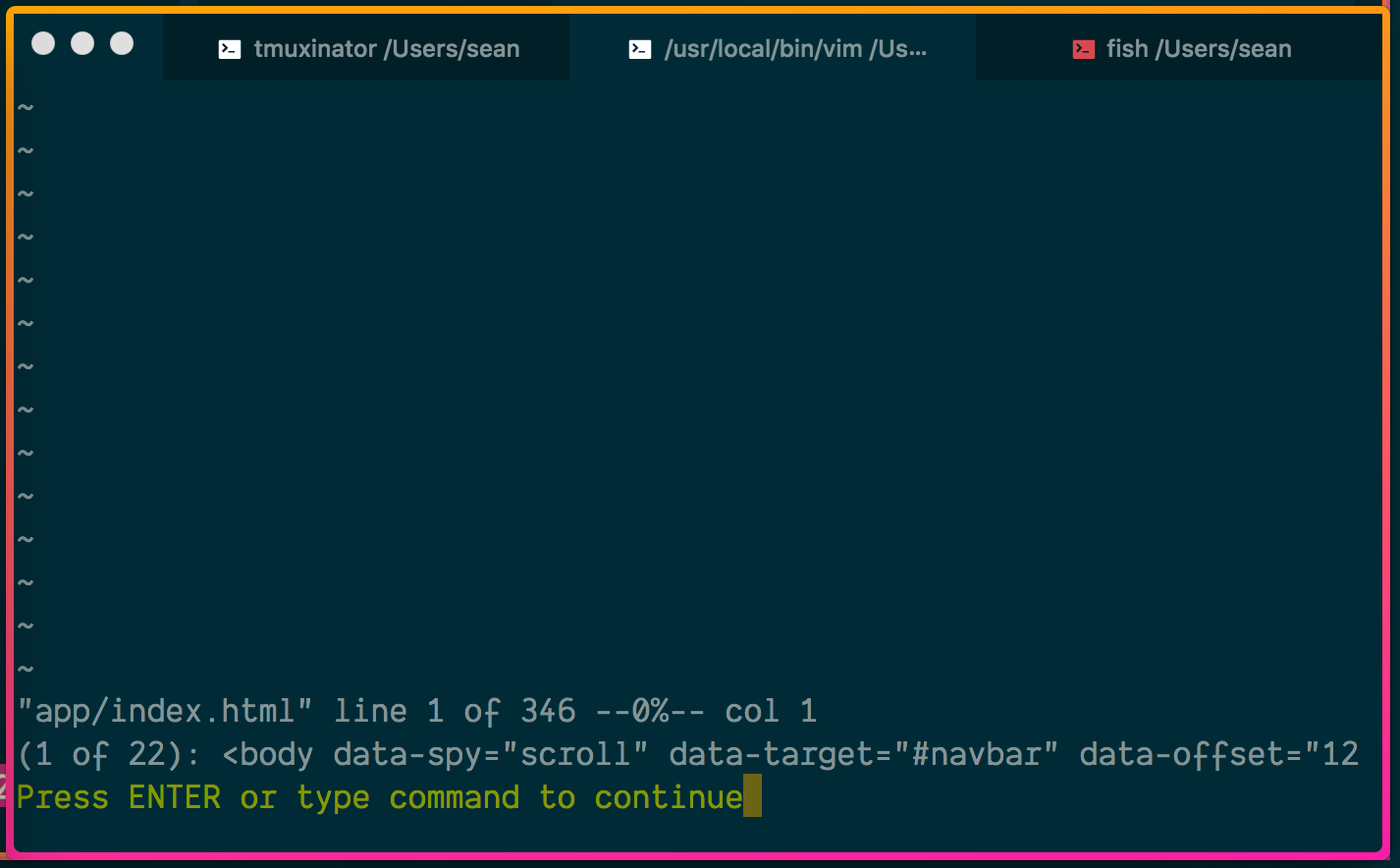 Ah, you’re back. Ok, so now why didn’t we get a list of results? It just showed off the first result, told us to press enter, and took us there. Well, you have to open the quickfix window, silly!

Navigate the quickfix contents with j and k. Depending on you color settings, you may or may not be able to see where you are at any given time. Just hit enter when it feels right.

Here’s not a gif of the whole process so far against a simple static site with 23,262 lines:

This just won’t do. Let’s turn up the complexity!

Today is Long-Winded-Wednesday, so we’re just getting started.

Denite is an apparently nefarious yet amazingly performant interface unification engine for vim (and neovim!). What is it and isn’t is a bit more complicated, but for our purposes it is a lightning fast system for interacting with lists that will the quickfix list (:copen) shown above.

Denite has both the “asynchronous” and “fuzzy” buzzwords, which covers about 80% of my requirements for adopting a new tool. The other 20% is mostly “automagical(ly)”.

So - here’s the same operation with Denite:

Oh, bee tee dub - this was actually against 319,601 lines. Booyakasha. I’ll wait while you frantically paw for you credit card and go out to buy Denite.

I’m not one to leave well enough alone, so let’s drop a stage 4 turbo in this thing and cut off the mufflers.

rigrep is is a grep alternative that is fast like a NASCAR. We can plug it into Denite as such, per the docs:

Barely broke a sweat. The fans on my 2015 i3 MacBook Pro did spin up, but I was also making a UHD screen recording and uploading files from an external drive to Amazon Drive at the time.

If you like what you see, go ahead and install rg with your favorite package manager. If you also like replacing text from within vim, add vim-rigrep to your vim plugins (more on that later).

Here are some of the things you can do with Denite out of the box, and some mappings that don’t conflict with any core vim features (that I use):

But What About The /Replace?

There’s an app for that. As the kind folk at thoughbot have pointed out:

With the release of Vim 7.4.858 we got two new commands: :cdo and :cfdo. They work similarly to :argdo, but they operate over the quickfix list instead of the arguments list.

Let’s try this out. Going back to the CSS class example, we have:

Splendid, it works well. And it requires a bunch of really awkward typing. We can fix that with some vim script in our .vimrc:

WARNING: There’s a lot of variation in results here depending on your individual configuration. A few points: